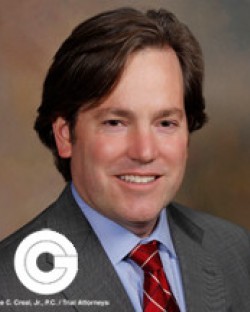 George Creal is an Atlanta DUI trial lawyer with over 25 years of experience. The other DUI lawyers in George's firm are Eric Bernstein and Justin Goodman. Eric and Justin bring over 20 years of combined experience in major felony and misdemeanor prosecution in Georgia and Massachusetts and as a Miami Florida major felony public defender. George began his legal career working as a lawyer for a Georgia Superior Court Judge, for a Federal District Court Judge, and for a County Attorney. He worked as an Insurance Defense lawyer representing Insurance Companies in all areas of civil litigation from car accidents to government entity defense to construction site catastrophic injuries. George has argued before the Georgia Supreme Court and the United States 11th Circuit Court of Appeals. George opened his law firm in 1996 and since then has secured well over 100 "not guilty" verdicts in criminal and DUI jury trials and tried several week long personal injury lawsuits to juries in Federal Court and scores of jury trials in State and Supierior Court securing millions of dollars of settlements and judgments for his clients in personal injury, workers compensation, civil rights, employment discrimination, construction and business lawsuits. George brought his thoroughness as a civil litigator to his criminal practice. Due to his success in criminal and DUI litigation, the past 15 years of his practice has focused mostly on DUI jury trials. George has successfully defended scores of marijuana DUI charges as a Marijuana DUI requires that the driver be proven less safe to drive which is nearly impossible. George and his legal team's reputation in the courtrooms of Georgia is legendary. George, Eric and Justin are often contacted by sheriff's deputies, police officers, state troopers, judges and prosecutors when they need legal help for friends and family. They don't call him the "Real Deal" for nothing.

George C. Creal, Jr., P.C., Trial Lawyers is AV rated firm by Martindale Hubbell, has Superlawyer designation, a 10/10 rating on Avvo.com. George is asked to speak at Continuing Legal Education conferences instructing other Georgia lawyers about DUI law and practice on a yearly basis and sometimes twice in a year. George and his team are consistently at the top of Google, Avvo and Yelp for 5 star customer reviews. George and his team are members of the National College of DUI Defense and the Georgia Association of Criminal Defense Lawyers.

We can be found on internet by searching:

We practice all over north Georgia and for a higher fee will travel all over the State of Georgia. Some areas that we practice in are as follows:

Member
National Organization for the Reform of Marijuana Laws
2019