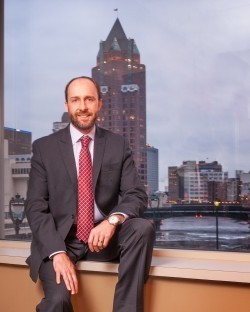 When facing the outrageous cannabis and other drug laws of Wisconsin or the federal government, you need a tough, experienced attorney to fight back and protect your rights and liberty. Work with the best when your freedom is at stake. Stephen M. Govin's practice is dedicated exclusively to criminal defense in state and federal courts across Wisconsin.He decided to form the Law Office of Stephen M. Govin, LLC to provide clients with the highest level of legal services while being personally involved with every aspect of the client’s case from start to finish. Stephen has always been recognized for his personable and professional demeanor in court and has achieved extraordinary results for his clients for over a decade by aggressively defending his client’s rights.

Stephen put himself through law school by bartending on the eastside of Milwaukee for three years and coaching numerous youth soccer teams in southeast Wisconsin. While at Marquette University Law School, Stephen focused on criminal law from his first day. He excelled in courses on evidence law, criminal procedure, federal criminal procedure, trial advocacy, the constitution and criminal investigation and many others. Stephen not only focused his coursework on criminal law but he applied for and received a number of clerkships while in law school that gave him real world legal experience even before graduating from law school.Stephen clerked for the Honorable Victor Manion in Milwaukee County Circuit Court, the Honorable Chief Judge of the Wisconsin Court of Appeals Richard Brown, and spent his last year of law school practicing law at the Milwaukee office of the State Public Defender.By the time Stephen graduated from Marquette University Law School he had more courtroom experience than many second or third year lawyers.

After being admitted to the bar, Stephen began working as a trial attorney at Reddin & Singer which would later become Reddin, Singer & Govin. From his first day of practice Stephen was solely responsible for his client’s files from start to finish and began trying cases in criminal courts throughout Wisconsin immediately. Because of Stephen’s unique background both athletically and academically, Stephen was quickly recognized as a formidable opponent in the criminal courts and as a rising star within the Wisconsin legal community.For over a decade Stephen has aggressively defended his clients in cases involving a wide array of charges from misdemeanor offenses to the most serious felony offenses in both state and federal courts throughout Wisconsin.Stephen has won numerous acquittals for his clients at jury trials and has successfully argued for the suppression of evidence in his client’s cases on a regular basis. Stephen has built solid relationships within the Wisconsin legal community and is known for his quiet confidence and personable demeanor. Not every case requires litigation or is appropriate for litigation and Stephen has the experience to know what is best for each case; however, Stephen’s competitive nature is on full display while litigating trials and he has never shied away from a tough fight when that is what is required.Year after year Stephen has been named a Rising Star by Milwaukee Magazine, recognizing him as a top criminal defense attorney in Wisconsin as voted on by other attorneys and judges.

Stephen is a member of various professional organizations and legal bodies. Stephen has lived in the Milwaukee and Waukesha County area since his first birthday and is deeply engrained in the southeastern Wisconsin community. Stephen is married and has one daughter and his family presently lives in Waukesha County.In his free time Stephen enjoys traveling the world with his family, music, playing soccer, surfing, and food and wine.